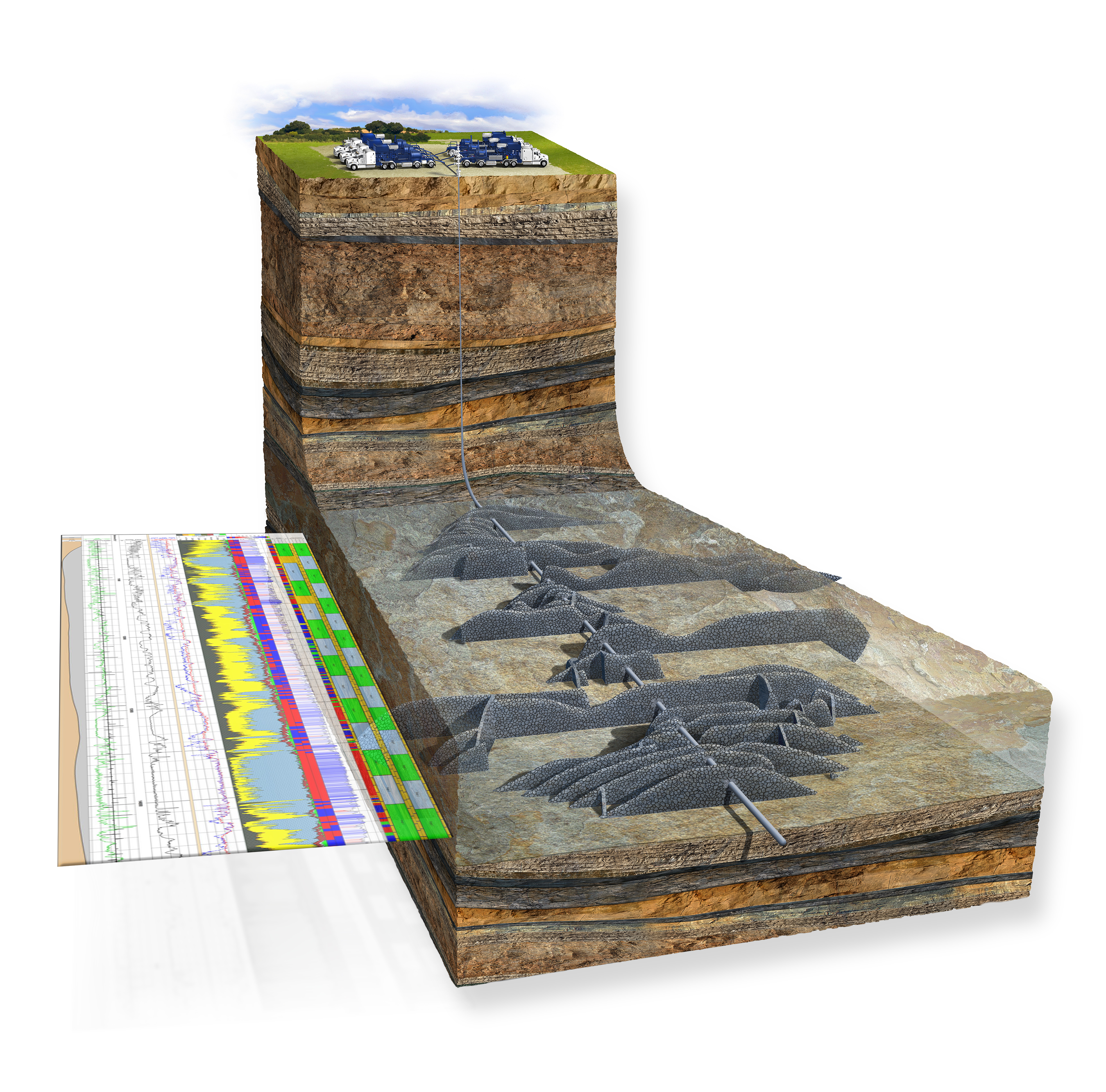 The principle of interpretation of the logs bases on the different physical properties such as the electrical conductivity, radioactivity, sound propagation, etc… of different rock types and fluids in the formation, that cause the change of signal behavior on the logging curves.

The interpretation process can be summarized into the following flowchart showed below:

The lithology of the formations which have been drilled through is not always immediately obvious from the logs which have been run. However, in virtually all exploration and appraisal wells the interpretation of the lithology will be supported by evidence which is derived from drilled cuttings by the mudlogging engineer or geologist as well as analysis of cores which have been cut and retrieved from the well.

If the formation is made up of one mineral, then a particular log measurement may be used to identify that mineral and therefore infer the rock type. If the formation is made up of a mixture of known minerals, then it is necessary to use a combination of logs to obtain a good indication of the mineralogical content and therefore lithology of the formation. The composition of the rock can be inferred by crossplotting combinations of the Density, Neutron and Acoustic log data. The utility of this approach depends on the complexity of the rock as well as the number of porosity logs run. This technique can also be used to define the porosity of the formation and presence of gas.

Identification of permeable and non-permeable zones

The permeable zones on a logging suites can be identified by referring to the Gamma Ray (GR), Spontaneous potential (SP) and resistivity logs. The GR log is primarily used to differentiate between shales and other formation types, since shales contain high radioactive material than other types of rock, hence easily detect on GR curve. Shales generally have a very low permeability (very common caprocks) the Gamma Ray log response can be used in a qualitative way to identify non-permeable zones.

The technique for identifying permeable zones on an SP log is provided by the phenomenon of natural electrical potential drop as the currents flow through the fluids. The potential drop generally is larger in the borehole than in the shale, or permeable formation. Readings opposite shales are relatively constant and are referred to as “the shale baseline”. Opposite permeable formations the SP curve typically shows excursions to the left (negative polarity) or to the right, depending upon the salinity of the drilling mud and formation waters. A comparison of the resistivity readings from the flushed zone, shallow and deep into the reservoir will give some indication of the depth of penetration of the borehole fluid and therefore the permeability of the formation.

Determine the porosity of the zones of interest (hydrocarbons zones)

Rock porosity is generally determined from the measurements from one, or a combination of the following logs: Acoustic log, density log and/or neutron log. The measurements of the neutron, density, and sonic logs depend not only on porosity, but also on the formation lithology, on the fluid in the pores, and in some instances, on the geometry of the pore structure. When the lithology and the matrix parameters are known, correct porosity values can be derived from any one of these logs, appropriately corrected for environmental effects, in clean water filled formations.

Accurate porosity determination is more difficult when the matrix lithology is unknown or consists of two or more minerals in unknown proportions. Determination is further complicated when the response of the pore fluids in the portion of the formation investigated by the tool differs appreciably from that of water. In particular, light hydrocarbons (gas) can significantly influence the response of all three porosity logs. Even the nature of type of pore structure affects the tool response. The neutron and density logs respond to total porosity – that is, the sum of the primary (intergranular or intercrystalline) porosity and the secondary (vugs, fissures, fractures) porosity. The sonic logs, however, tend to respond only to evenly distributed primary porosity. When any of these complicating situations exists the porosity of the rock can only be determined by crossplotting the measurements from two different log types. In other words, the porosity cannot be determined from a single porosity log. Remember that porosity is obtained by calculation, therefore it strongly depends on which method used to derive and which assumption that we made.

(Part 1) Well logging. Its role in oil and gas exploration